Most breech babies will turn naturally before labour. You will probably be referred to an obstetrician as these days few midwives will undertake a breech birth, even though in the past most midwives considered this within their scope of practice. There are still some midwives who are happy to assist with this variation of a normal birth, so it may be worthwhile asking around in your local community to see if you can find a willing midwife.

Recent research, an internationally conducted randomised controlled trial, concluded that caesarean section was the preferred birth option, but this study has been heavily criticised because it has given conflicting results.

The book Breech Birth Woman Wise by Maggie Banks (an experienced New Zealand midwife) is also worth reading. Intended as a manual for midwives and doctors, it contains considerable detail that will interest parents as well, and may be useful as a reference for your caregiver.

Another very useful reference that explains the choices for women and midwives is the book Breech Birth – what are my options published by AIMS UK. This book, primarily written for parents, sets out the facts around breech birth, possible complications and includes a useful list of resources.

Your main problem will be the limited time you have in which to consider your options. Breech babies are usually only diagnosed in the last weeks of pregnancy and there is little time to organise consultations or second opinions. Your midwife is a useful source of information: she will know which obstetricians are supportive of vaginal births (probably not many) and which practitioners can perform an external cephalic version (ECV) for you.

The struggle to find support for a vaginal breech birth within the health care system is well described in the DVD A Breech in the system. This film includes descriptions by the mother of the steps she took to ensure her wishes were respected, conversations with her midwives and footage of the eventual vaginal birth. It may give you some ideas of how to approach this issue with your caregivers.

Some midwives will undertake vaginal breech births, as part of their home birth practice. In the UK, some women choose to stay at home because they believe they can give birth to their breech baby vaginally, and wish to avoid the pressures imposed by hospital environments. They are also protected by the law in the UK that requires a midwife to stay with a woman to chooses to birth at home, even of they have been advising against it. In other countries, midwives and women don’t have this legal protection and this may be a limiting factor in finding a midwife who can assist with the birth, either within a hospital or in your home.

Options for managing the birth are described below. In the meantime, it is worthwhile encouraging the baby to turn head down, as this will solve the problem and a straightforward vaginal birth can be anticipated.

Helping the baby to turn

If the baby settles (engages) into the pelvis it will be difficult for the baby to turn. This exercise, done 3 times each day for 15 minutes discourages the baby from settling into the pelvis. 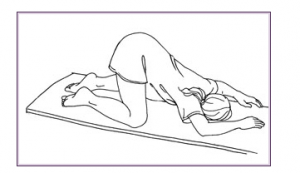 Research indicates that manually massaging the baby into a better position is often successful for turning breech babies if done around 39 weeks. You will need to find a caregiver skilled in this procedure, and you may need to take a drug (Ventolin or Ritadrine are commonly used) to calm the painless contractions and reduce the sensitivity of the uterus while it is being done. As there is always a very slight risk that the cord will become entangled or the placenta starts to separate as the baby is turned, external cephalic version should always be done in a hospital, where a Caesarean section is available in the unlikely event of such an emergency.

Using moxibustion to encourage the baby to turn by itself

A very successful “do it yourself” technique with a proven high success rate is to use locally applied heat treatment.

The heat from burning moxa sticks can also be used to stimulate the baby’s movements and encourage it to turn. These sticks, shaped like cigars, are available from herbalists, Chinese medicine stockists and some acupuncturists (who use moxa sticks for other purposes) and they contain tightly rolled dried leaves of the mugwort plant. They are very inexpensive and two sticks will be needed – they can be used several times. 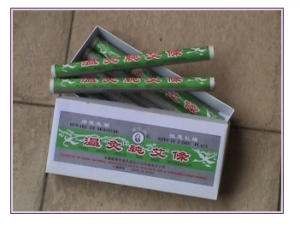 Sit on a chair and place each foot on a book with your little toes hanging over the edge. Place each stick on another book with the tip in the gap.

Light the sticks (they burn with no flame but an intense heat and pungent smell) and position the hot tip as close as possible to the outside of each little toe, with the heat directed at the point just above the toe nail. Leave in place for 20 minutes. Be careful not to touch the skin as you will burn yourself. The heat should be as strong as you can tolerate, for the best effect.

After a few minutes, you will notice the baby begin to kick and move. The primary aim of the moxibustion treatment is to encourage the baby to move around and thus increase the effect of gravity which will help the heaviest part of the baby (its head) to turn over and enter into the pelvis.

This simple treatment is best done just before bed, starting at 34 – 36 weeks. It takes several hours for the baby to turn, and this will be easier if you are lying down, because the baby will not be sitting as firmly into the pelvis. Continue over several nights, or until the baby has turned itself.

A randomised controlled trial (see below) indicates that at approximately 70% of breech babies will turn using this method. If the baby does not turn from its breech position, external cephalic version should be attempted just before labour begins. Further information can be found in the Cochrane Library.

If, after trying the moxibustion and/or external cephalic version, the baby does not move into a head down position, there may be a good reason why the baby prefers to remain in the breech position -perhaps the placenta is positioned low down, limiting the space for the baby’s head in the lower part of the uterus or the uterus itself is shaped unusually and is restricting the baby’s movements. If the baby does not turn easily, then it must be assumed that the baby needs to stay where it is, and options for the birth (either by caesarean or vaginally) will need to be considered.

Giving birth to a breech baby

Today, most women will be advised to have a Caesarean section for the birth of their breech baby, especially if it their first child. Although Caesarean section carries its own risks and requires time to recover from the surgery afterwards, this may be the only option available, especially if your caregiver has little or no experience of vaginal breech birth.

Your chances of a safe vaginal birth will be increased if this is not your first baby, you have a small baby, you are carrying twins (twins are usually much smaller than singleton babies), you have given birth vaginally to a breech baby before, you labour without an epidural or an induction and you remain upright and mobile during the labour and birth. A caregiver who is familiar with breech birth and confident of their practice will also make this option much more successful.

If you decide to accept a Caesarean birth, it is advisable to wait until labour begins before the surgery is performed, as this will eliminate the risk of prematurity and give the baby the benefits of the labour contractions, which are important for the final maturation of the baby’s lungs in readiness for breathing on its own.

Shop around for a caregiver if your baby is breech. You may have little time, but it may prove worth the effort to get the birth you want for your baby.

Many midwives lack confidence in assisting breech births, especially since the majority of breech births have been managed by Caesarean surgery. However, as furtehr evidence of the safety of vaginal breech births has been collated, many hospitals and practitioners are looking to upskill their staff to assist vaginal breech births for those women who wish to avoid surgery and whose babaies are in favourable positions. Workshops and training sessions for staff are now being scheduled and Birth International offers a one-day workshop that includes this topic, Rising to the challenge: shoulder dystocia and breech birth.

Maggie Banks also offers training in this area throughout New Zealand and the details can be found on her Birthspirit website.

Context
Traditional Chinese medicine uses moxibustion (burning herbs to stimulate acupuncture points) of acupoint BL 67 (Zhiyin, located beside the outer corner of the fifth toenail), to promote version of fetuses in breech presentation. Its effect may be through increasing fetal activity. However, no randomised controlled trial has evaluated the efficacy of this therapy.

Objective
To evaluate the efficacy and safety of moxibustion on acupoint BL 67 to increase fetal activity and correct breech presentation.

Setting
Outpatient departments of the Women’s Hospital of Jiangxi Province, Nanchang, and Jiujiang Women’s and Children’s Hospital in the People’s Republic of China.

Patients
Primigravidas in the 33rd week of gestation with normal pregnancy and an ultrasound diagnosis of breech presentation.

Interventions
The 130 subjects randomised to the intervention group received stimulation of acupoint BL 67 by moxa (Japanese term for Artemisia vulgaris) rolls for 7 days, with treatment for an additional 7 days if the fetus persisted in the breech position. The 130 subjects randomised to the control group received routine care but no interventions for breech position. Subjects with persistent breech presentation after 2 weeks of treatment could undergo external cephalic version anytime between 35 weeks of gestation and delivery.

Main Outcome Measures
Fetal movements counted by the mother during 1 hour each day for 1 week; number of cephalic presentations during the 35th week and at delivery.